The rainbow, God’s sign in the sky, that he would never again flood the earth. How did it become the main symbol for the homosexual and transgender communities? 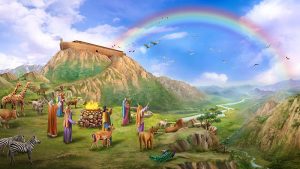 So how can marriage, outside God’s design, one man and one woman, be accepted by Bible-believing Christians?

There seems to be just a handful of possible reasons, as incorrect as they might be, for not contesting the hijacking of the rainbow by the “LBGTQ” crowd, not calling them to repentance and not being able to answer questions from those trying to disprove any prohibitions for these lifestyle choices.

Some people have come back to me saying, But Jesus never addressed the issue of “Gay marriage”. He did, and here is Pastor Voddie Baucham speaking on the issue at a local church.

“But at the beginning of creation, God ‘made them male and female.’ ‘For this reason, a man will leave his father and mother and be united to his wife, and the two will become one flesh.’ “So they are no longer two, but one flesh.  Therefore what God has joined together, let no one separate.” (Mark 10:6-9)

“The proud religious law-keepers said to Jesus, “Then why did the Law of Moses allow a man to divorce his wife if he put it down in writing and gave it to her?” “Jesus said to them, “Because of your hard hearts Moses allowed you to divorce your wives. It was not like that from the beginning. And I say to you, whoever divorces his wife, except for sex sins, and marries another, is guilty of sex sins in marriage.” (Matthew 19:7-9)

“His followers said to Him, “If that is the way of a man with his wife, it is better not to be married.”  But Jesus said to them, “Not all men are able to do this, but only those to whom it has been given.  For there are some men who from birth will never be able to have children. There are some men who have been made so by men. There are some men who have had themselves made that way because of the holy nation of heaven. The one who is able to do this, let him do it.” (Matthew 19-10:12)
Christian, love God and Love Others in Christ’s name. Our commission from the Lord is to explain the Gospel to the lost, God will take care of the saving part. Stand firm on His Word, in our hearts, revere Christ as Lord. Always be prepared to give an answer to everyone who asks you to give the reason for the hope that you have. But do this with gentleness and respect.
In this article: