Of any of the US cities to use, as an example of how great a job they did fighting the “VIRUS’, New York City would NOT be one of them.

According to many, such as Gothamist, NYC  Mayor Bill De Blasio has a long record of missteps during their CV-19 response. 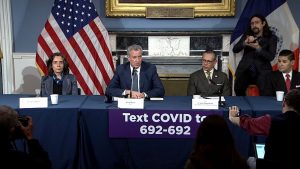 On January 24th, Mayor Bill de Blasio held his first briefing on the coronavirus crisis in New York City. At the time, there were no confirmed cases in New York City, and the focus was still on Wuhan (a week prior, it was announced that travelers from that area of China would be screened at area airports). At that first briefing, Health Commissioner Dr. Oxiris Barbot said, “New Yorkers should know the risk to residents of the city is low.” It’s likely the virus was already spreading here at that time, we simply weren’t testing for it.

On March 11th, de Blasio went on The Daily Show with Trevor Noah, joked about elbow bumps, and recommended that New Yorkers could go about their lives with only a few lifestyle changes.

On February 2nd, a week after that first press briefing on the virus, de Blasio said, “We understand some things about this disease… what is clear is the only way you get it is with substantial contact with someone who already has it. You don’t get it from a surface. You don’t get it from very temporary contact, based on what we know now.”

Mayor Bill de Blasio said some hospitalized patients who have tested positive for the coronavirus should still return to their nursing homes — even though they risk exposing other elderly residents to the deadly bug. 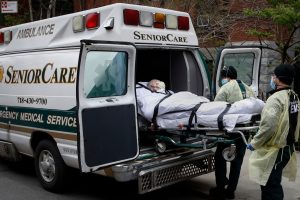 “If the better care in that individual case is the hospital, of course, that’s a go-to option, but there’s going to be a time when a nursing home could be the better care if it’s set up that way,” de Blasio insisted on MSNBC’s “Morning Joe” Wednesday.

MSNBC host Willie Geist had asked de Blasio if the order issued by Gov. Andrew Cuomo to allow patients with coronavirus to leave hospitals and go back into nursing homes was a mistake, given that the death toll at nursing homes surged to 4,813 earlier this week — nearly a quarter of all fatalities in the state.

Then after issues, a shelter is place order from NYC,

Well, believe it or not, the failed one, Dr. Anthony Fauci, recently praised NY for its handling of the “pandemic”. National talk show host, the Great One, Mark Levin, ripped Fauci’s appearance on PBS praising NY’S handling of the “VIRUS”.

More than 400,000 New Yorkers have been infected with COVID-19 since the pandemic began and at least 32,463 people have died in the state.

Levin called Fauci’s statement “shocking,” adding that Fauci’s “gift of communication” gives him an odd sort of charisma and that the mainstream media has consistently over-hyped his proficiency.

Yes, Mark, the leftists, including Fauci, have completely mishandled this virus. Why this happened, leads us to several possible options:

Of these three options, your choice would probably reveal your confidence in the morality of our government officials and might even confirm who you will be voting for on November 3rd, 2020.