A doctor, chaplain, and pastor are crediting the hand of God in the recovery of a Queens pastor who spent 54 days on a ventilator and six weeks in an induced coma battling CV-19. As the new virus was still ravaging victims at The Mount Sinai Hospital on April 19, Dr. Robin Varghese was worried there was nothing he could do to help then comatose Queens Pastor Benjamin Thomas recover from the virus.

“I was on call that night and he was in the worst shape and many of our team members who were rooting for him were also losing hope as was I,” said Varghese in a video shared by Mount Sinai with The Christian Post.

“The God of miracles did numerous miracles in my life,” Benjamin Thomas of Queens Church of God said in a video posted online. “I’m very happy to be home.”

Only weeks earlier in late March, Thomas had been busy doing God’s work with his congregation at .

He and his congregation had been engaged in an annual 21-day fast for revival. People were only just beginning to understand the real threat of the virus and social distancing was still fairly new. Nevertheless, said Thomas, his church felt the weight of the moment enough to start praying for healthcare workers too.

Then some time near the end of March, Thomas told CP he developed a fever that refused to go away.

His wife soon had to call for an ambulance as he developed shortness of breath, and he was transported to Nassau University Medical Center to be treated. He was placed on a ventilator for support. As Thomas was not improving, his family reached out to, a cardiovascular surgeon at Mount Sinai Medical Center, to ask if there was anything that could be done to help him. 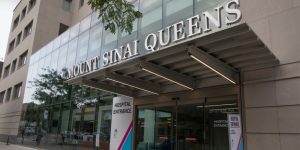 On April 19 — a particularly bleak day, as Varghese was on call, he went into Thomas’ room and began to pray.

“I told God that there’s nothing else I can offer [Thomas]. He’s got to take over because we’ve given him everything that modern medicine can throw at him,” Varghese recalled.

That same night, Vargese studied Thomas’ case and began to have a few ideas come to mind of treatments they could try. He that said Thomas’ condition incrementally began to turn around after that point. “He started to make slow — very slow but steady — progress,” he recalled. “His lungs were just ravaged by the COVID-19 virus.”

“By the middle of May, we all started to see hope that he was going to make it,” he joyed, patting Thomas on the shoulder. “We’re very happy that he continued to progress and he started to wake up.”

Varghese thanked those who had been praying for Thomas. , his church started a prayer chain that went around the world.

“We’re thankful for all the people that we’re continuing to pray for him because we know that was a very important part of his recovery, along with the care by our intensive care team,” Varghese stated in the video.

Chaplain Rocky Walker also remarked that Thomas’ recovery is a demonstration of “the power of God.”

Thomas told the Christian Post that he is glad to have a doctor like Varghese who is “a great man of God” and is not afraid to “lift up the name of Jesus.” He came home July 2 with temporary oxygen support.