Caroline Reilly, a so-called reporter for Rewire New Group has issued a call for violence against anyone or anything pro-life. Just two days ago, liberals across the country warned that the SCOTUS leak would lead to violence by conservatives. You knew right then, that they were trying to gaslight the American people. But, those of us who have been paying attention over the last few years, knew that the left would be planning and carrying out the violence.

Reilly responded to a New York Times article about the violent firebombing of a pro-life organization in Wisconsin by saying that the attack was a good thing and encouraged more of the same behavior. She tweeted that message and for some reason, the powers that be at Twitter decided that calling for violence by a leftist is not a violation of their terms of service.

Journalist Mike Cernovich pointed this out to Elon Musk in a tweet:

No kidding, Sherlock. Hopefully, you will correct this once you take the reins of the platform, Elon. 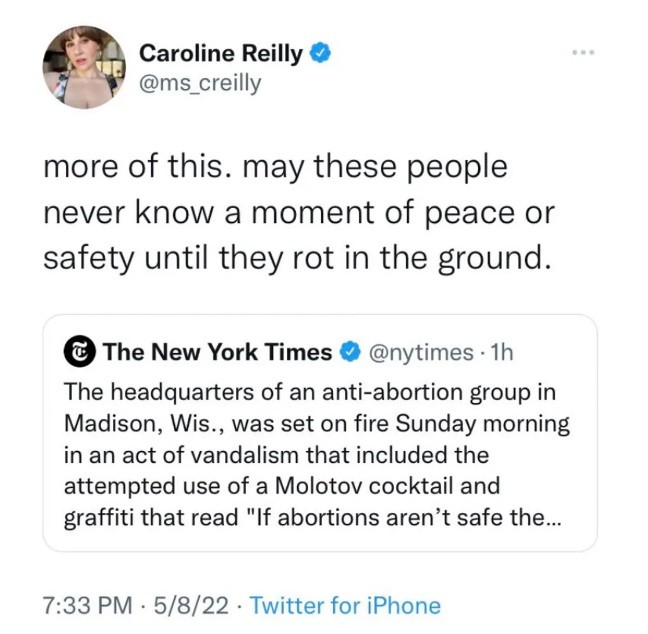 This is not a statement that has dual meanings. It is clear-cut. But, if you say there are only two sexes, you are gone in a minute because they consider that to be a call for violence. And anyone reading it knows exactly what she wants to see happen. She has not been banned. This is precisely why we need Elon Musk to take over Twitter.

This is just another example of how the corporate media are now a plague of violent, neurotic, bitter, unstable, deeply unhappy left-wing freaks who see their cause — including the cause of murdering innocent, unborn babies right up until birth — as so righteous that there are no moral boundaries when it comes to protecting and furthering that cause.

Antifa and Black Lives Matter are both left-wing terrorist groups, are both responsible for the burning and looting of countless Democrat-run cities, and our media not only lionize both as the second coming of Martin Luther King, but the media also cover up their serial crimes against people and property.

We are now dealing with a corporate media backed by billions and billions of corporate dollars that not only blatantly lie to the public but are ready and eager to encourage and justify violence, including the firebombing of pro-life groups, against those they see as their political enemies — and that is anyone to the right of Joy Reid.

These people are dangerous, they’re unstable, and their only “morality” is that which furthers the fascist cause.