Lawlessness in Minneapolis as anarchists have taken control of four blocks, illegally!

Similar to what Sharia Muslims have done in Paris and other European cities, unappointed mob leaders actually control the traffic coming in and out of the “No Go Zones”. In these illegally commandeered city blocks, local police are not allowed to enter, leading to increased crime, and the loss of Law and Order! 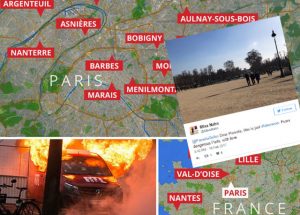 Like CHAZ, the locals who just want to live in safety, move around freely, and get their community working again, are trapped because of the city’s refusal to intervene.

The NY Times is reporting

Two months after the police killing of George Floyd, the four-block area of South Minneapolis where he gasped his last breaths remains a sacred space, a no-go zone for officers. There is a neatly trimmed garden, anchored by a sculpture of a raised fist. There are colorful murals and the words “I can’t breathe” painted across the pavement, as well as the names of dozens of other Black people killed by the police. 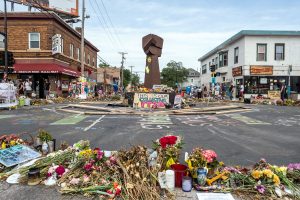 At night, though, this area is increasingly a battleground, with shootings and drug overdoses. The area has had an uptick in gun violence similar to what other cities have seen in the wake of protests. 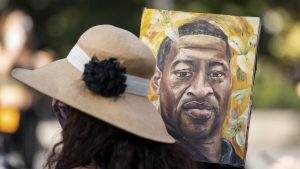 But in Minneapolis, at least for now, the city is moving cautiously.

“Opening up too quickly will have a devastating effect on people still mourning,” said Angela Conley, a Hennepin County commissioner, who has been leading community discussions about the future of the area where Mr. Floyd was killed.

“What people aren’t recognizing is that people who live there are having a very, very challenging time from the unlawfulness that is occurring after the sun goes down,” said Andrea Jenkins, a member of the City Council whose district includes the memorial space. “There are constant gunshots every night. Emergency vehicles can’t get in. Disabled people are not able to access their medications, their appointments, their food deliveries, et cetera. It’s a very challenging situation.” 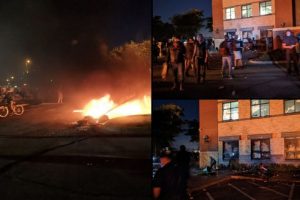 Ms. Dawkins lives a few doors down from Cup Foods, the store where Floyd tried to use the fake $20 bill, was selling candy and drinks, and promoting a GoFundMe campaign to raise money to avoid foreclosure. When the pandemic hit, she was furloughed from her job at Nordstrom, and her fiancé is also out of work.

But financial worries are only one thing on her mind. She has two children, including a 6-week-old baby. She says the daytime is fine, and she has met many people who have traveled to pay their respects to Mr. Floyd.

“But when the other crowd comes at night, I can’t call the police, and that scares the hell out of me,” she said. Ms. Dawkins pointed to a gunshot in the windshield of her car, a gold sedan.

“We have kids in this home, so I do want police to protect families,” she said. “It’s a hard balance. I’m happy this incident brought change, but I want to feel safe.”

So how long will it take the community to heal?

Until someone believes they have, the Americans living in this four back area of Minneloplic have lost their Constitutional protections, but are afraid to say much, as it would be insensitive.

They have to listen to gunshots and can’t call the police, because they are not coming.

What a scary and unacceptable condition for the city officials to force them to live in. Progressive governance never cares about the people, it is always about taking and keeping power!