The deputy manager of Joe Biden’s 2020 presidential campaign slammed The New York Times on Wednesday in a letter to the newspaper’s executive editor — blasting the paper’s coverage of the former vice president’s involvement in Ukraine.

The letter, written by Kate Bedingfield to Dean Baquet, criticizes the paper for “giving top billing” to “Clinton Cash” author Peter Schweizer in a Wednesday op-ed titled, “What Hunter Biden Did Was Legal – That’s the Problem,” CNN reported.

In his article, Schweizer asserts Biden was “self-dealing” in Ukraine while vice president.

“Congress can and should conduct an inquiry to determine whether anything illegal occurred,” Schweizer writes.

My piece in the @NYTimesOpEd today on the Bidens: “Congress can and should conduct an inquiry to determine whether anything illegal occurred.” https://www.nytimes.com/2019/10/09/opinion/what-hunter-biden-did-was-legal-and-thats-the-problem.html …

We need a Washington Corrupt Practices Act to stop political families from self-dealing.

Bedingfield goes on to criticize The Times’ Ukraine coverage at large. She writes that the newspaper had an “outsized hand in a baseless conspiracy theory” promoted by Trump’s attorney, Rudy Giuliani, that Biden acted inappropriately in helping get rid of a Ukrainian prosecutor. She then accuses The Times of “active participation” in a “smear campaign” against Biden, citing a May article titled “Biden Faces Conflict of Interest Questions That Are Being Promoted by Trump and Allies.”

Here’s the letter Biden deputy campaign manager @KBeds sent NYT editor Dean Baquet. “Are you truly blind to what you got wrong in 2016, or are you deliberately continuing policies that distort reality for the sake of controversy and the clicks…?” https://mailchi.mp/cnn/rs-oct-9-2019 … 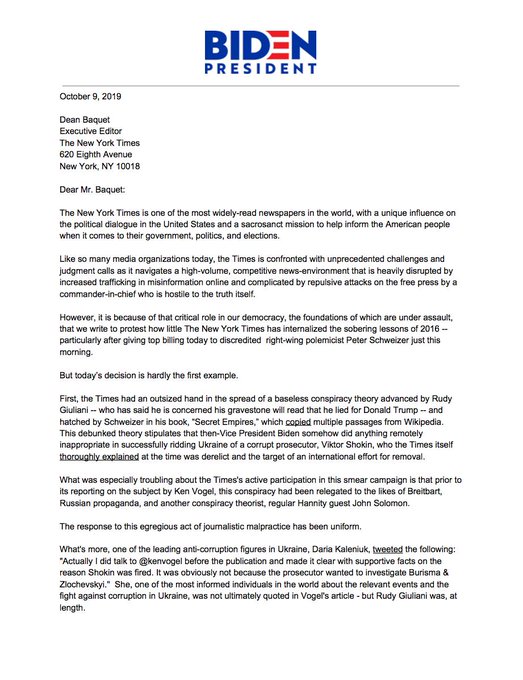 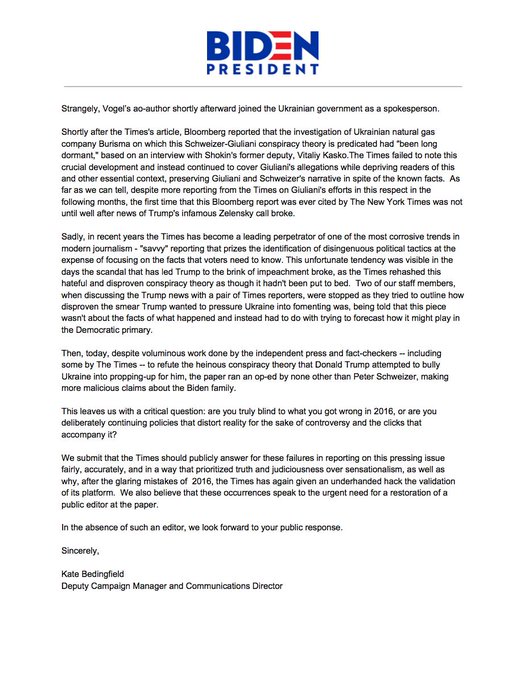 A @nytimes spox pushed back on Biden camp, saying, “Our coverage of the Biden campaign and Hunter Biden has been fair and accurate.” https://mailchi.mp/cnn/rs-oct-9-2019 … 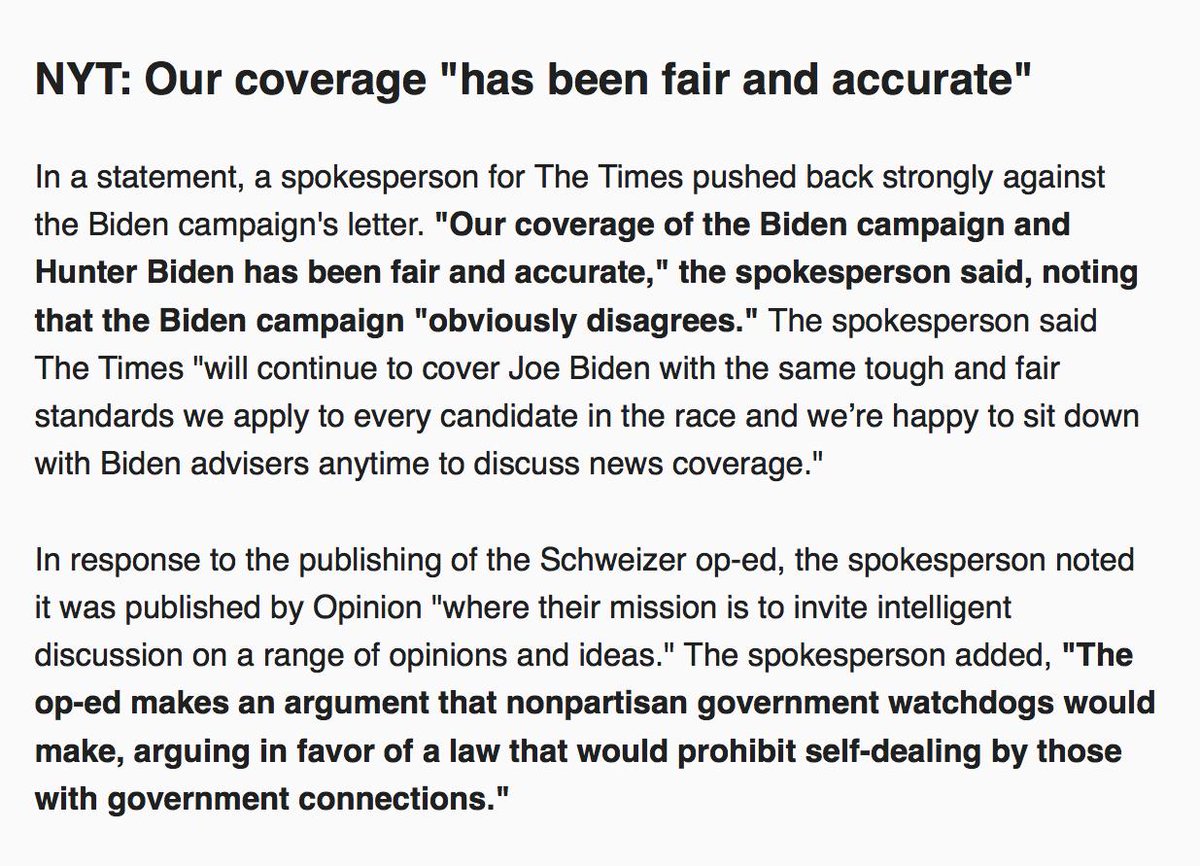 The Times later pushed back against the Biden campaign official’s assertions, according to a statement obtained by CNN.

“Our coverage of the Biden campaign and Hunter Biden has been fair and accurate,” the newspaper wrote, adding it “will continue to cover Joe Biden with the same tough and fair standards we apply to every candidate in the race and we’re happy to sit down with Biden advisers anytime to discuss news coverage.”

The Times’ statement emphasized the Schweizer story was published in the Opinion section, “where their mission is to invite intelligent discussion on a range of opinions and ideas.”

The Biden campaign also sent letters to Twitter and Facebook on Wednesday, asking them not to run ads from the Trump campaign that promote what it described as conspiracy theories about the Bidens in Ukraine, according to CNN.