North Korea’s little dictator Kim Jong-un was so unimpressed with America’s new Thief-in-Chief that he refused to even acknowledge President Joe Biden, instead, having his little sister Kim Yo-jong do the honors who warned the Biden administration against “causing a stink” when trying to deal with the communist regime.

North Korea fired off two short-range missiles over the weekend just days after Jabba the Un’s sister gave the warning.

You would think the two would get along great. In fact, I think Biden must be jealous of the fat little Rocket Man from North Korea because he has everything that Joe Biden wants. He has most of his people under tight government control, he doesn’t have to listen to his people, and he is the ultimate dictator. Isn’t that what Biden is trying to do in the United States using COVID and other phony crises to suspend the Constitutional rights of the American people?

The Washington Post, the darkness where democracy dies, first reported on the missile tests, noting they are Kim’s “first direct challenge to President  Biden, whose aides have not yet outlined their approach to the regime’s nuclear threat amid an ongoing review of the U.S.-North Korea policy.”

It was later confirmed that North Korea ran the missile tests over the weekend by a US official.

North Korea has ignored attempts made by the Biden administration to speak directly, alternatively having a statement issued by Lil Sis-un through the northern peninsula’s state-run news agency.

“We take this opportunity to warn the new US administration trying hard to give off powder smell in our land: If it wants to sleep in peace for (the) coming four years, it had better refrain from causing a stink at its first step.”

I think even a Brian Stelter can figure out what she meant. What may be bothering Dear Leader is American and South Korean military exercises being run in South Korea, according to ABC News.

“We have already declared our stand that no [Democratic People’s Republic of Korea]-U.S. contact and dialogue of any kind can be possible unless the U.S. rolls back its hostile policy towards the DPRK.”

In yet another scenario where reality smacks progressive ideology former President Donald Trump, who progressives said would get us into a nuclear war with North Korea actually got along nicely with Kim when they met back in 2018. Trump and Kim came to a hand-shake deal agreed upon by the dictator to end his government’s testing of long-range missiles of which he did because North Korea did not fire off long-range missiles since. Kim’s government did continue to perform short-range missile tests while Trump was president.

In October 2020, North Korea held a military parade where they showcased for all to see the largest intercontinental ballistic missiles in the world.

Every so many years, the North Korean dictator rattles his sabers and gets all the liberals in the media to report about how dangerous it is if Kim Jong-un acts up when a Republican is in the White House or they report how dangerous Kim Jong-un is without mentioning the White House if there’s a Democrat president. In the end, it always appears that Kim does this in order to get something he wants, be it money or food for his people, and when he gets it he’ll stand down, in essence, holding the world hostage with nuclear blackmail.

“The Kim Jong Un regime has achieved alarming success in its quest to demonstrate the capability to threaten the U.S. homeland with nuclear-armed ICBMs, believing such weapons are necessary to deter U.S. military action and ensure his regime’s survival.

“The North Korean regime has also indicated that it is no longer bound by the unilateral nuclear and ICBM testing moratorium announced in 2018, suggesting that Kim may begin flight testing an improved ICBM design in the near future.” Kim Jong-un’s Message for Joe Biden: We Will Bring U.S. ‘to Its Knees’

Joe Biden is not even president yet but already two-bit dictators are drooling at the thought of taking on the Chinese puppet known as Joe Biden.

The first one to speak up is North Korean dictator Kim Jong-un. Speaking at the 8th Congress of the Workers’ Party of Korea, Kim played up the economy and the advancements in missile technology.

He also told them that North Korea will bring the United States to its knees. Biden is already on his knees, paying homage to his Chinese masters. It looks like no one is very scared of Joe Biden. They think he could be mugged by US mail.

They are probably right.

“Our external political activities must focus on our arch-enemy and the fundamental obstacle to our revolutionary development, the United States,” Kim said, according to NBC. “The effort will focus on overpowering and bringing them to their knees,” he added.

Kim noted that regardless of who is in the White House, “the true nature of the U.S. and its fundamental policies towards North Korea never change.”

NBC News reports that Kim spoke for 9 hours on Saturday. And this guy has a nuclear arsenal? Yikes.

We have no idea if North Korea actually does have the advanced missiles they claim to have and just how effective they could be. Kim has a tendency to overstate things from time to time. But, we do know that before Trump, they were test-firing missiles regularly. Kim claims that they will begin test firing the missiles again.

[North Korea expert Ankit] Panda said Kim’s interest in tactical or low-yield nuclear weapons made sense, even though they can be “very inefficient in their use of fissile material,” which isn’t easy for North Korea to get.

“North Korea’s interest in these weapons isn’t surprising from a strategic point of view — in fact, it augments Kim’s preferred nuclear strategy quite well,” said Panda, author of “Kim Jong Un and the Bomb: Survival and Deterrence in North Korea.”

Panda said North Korea likely wants these tactical nuclear weapons to combat a potential conventional domestic invasion. That way, Kim could keep his strategic, longer-range nuclear weapons “for retaliation against the US and civilian centers in Japan and South Korea if the US and allies press on after that initial nuclear use.”

Republican Travis Allen is running for Governor of California 2018 New Orleans is fighting to keep historical monuments. Monuments that reflect history. Now people are demanding them to be taken down because these Confederate statues represent racism to them.

Look who’s running for governor of California in 2018. http://www.latimes.com/politics/la-pol-ca-california-governor-list-2018-htmlstory.html 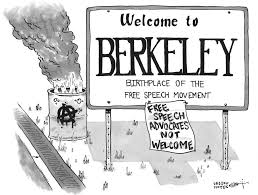 Joey Salads went undercover as Antifa and exposed them!! I like this guy. This is the real deal, check out this video.

University Professor: “Trump Must Hang” and he said all Republicans need to be executed. Everyone needs to call and get this guy fired. Let these liberals know this won’t be tolerated.

Russian warship steams toward US destroyers that launched Syria strikes

US launches missiles into Syria in response to chemical weapons attack

Nunes steps down from Russia-Trump investigation.

Rice needs to be made to answer for unmasking.

Will Johnson with California State Legislator Travis Allen-If you are in California and you are interested in knowing what legislation the Democrats are trying to push, this is a great Republican Legislator to follow on facebook, Travis Allen. Be informed. https://www.facebook.com/JoinTravisAllen/

The U.S. Sent Another $1.3 Billion to Iran After Hostages Were Released